The reasons for the extinction of dinosaurs.

With regard to the reasons for the extinction of dinosaurs, it is still being studied. For a long time, the most authoritative view, and the extinction of the dinosaurs 6500 years ago about a large meteorite. According to the study, there was a 7-10 km in diameter asteroid will fall on the earth's surface, causing a large explosion, such as throwing a lot of dust in the atmosphere to form the Zhetianbiri House of Sand and Fog, led to the suspension of plant photosynthesis , And therefore the extinction of the dinosaurs.Asteroid impact theory quickly gained the support of many scientists. In 1991, in Mexico's Yucatan Peninsula occurred in the discovery of a long period of the meteorite impact craters, the fact is further evidence of this point of view. Today, this view seems to have become a conclusion.

But there are also many people for such an asteroid impact on the skeptical, because the fact is: frogs, crocodiles and many other very sensitive to the temperature of the animals have resisted and survived the Cretaceous. This theory can not explain why only the dinosaurs died. To date, scientists have put forward for the cause of the extinction of dinosaurs have been no fewer than a dozen scenarios, more wealth to the dramatic and exciting, "said the meteorite collision," but it is one of them.In addition to the "meteorite collision", the extinction of dinosaurs on the main point of view there are the following:First, climate change, said. 6500 million years ago, the Earth's climate suddenly changes in the temperature dropped, resulting in decreased oxygen in the atmosphere so that the dinosaurs could not survive.It was also suggested that dinosaurs are cold-blooded, but with no hair or warm organ and can not adapt to the Earth's temperature dropped, were frozen to death of.

Second, the species, said the fight. End of the dinosaur era, first appeared in small mammals, these animals are rodent predators may feed to eggs.As a result of this lack of small animal predators, more and more and eventually eat up the eggs.
Third, continental drift, said. Geology Research shows that the survival of dinosaurs at the age of the Earth's only a piece of the mainland only,that is, "Pangea." Due to changes in the earth's crust, the continent took place in the Jurassic of the larger division and drift,leading to the environment and climate change, and therefore the extinction of dinosaurs.

Fourth, changes in the geomagnetic said. Modern biology shows that certain biological and magnetic fields related to the death.More sensitive to the magnetic field of biology, in the Earth's magnetic field changes, may lead to extinction.It seems therefore that the extinction of the dinosaurs may be related to changes in the Earth's magnetic field. V. said angiosperm poisoning. End of the dinosaur era, the Earth gymnosperms gradually disappearing, replaced by a large number of angiosperms,gymnosperms contain these plants are not in toxic shape of a huge dinosaur odd food, intake of a large number ofangiosperms led to the accumulation of toxins in the body Too much, finally the poison.Six, said acid rain. The late Cretaceous period may have been under strong acid rain, soil, including in the trace element strontium,be dissolved dinosaurs through drinking water and food, directly or indirectly, strontium intake, acute or chronic poisoning, the last groups of the dead. 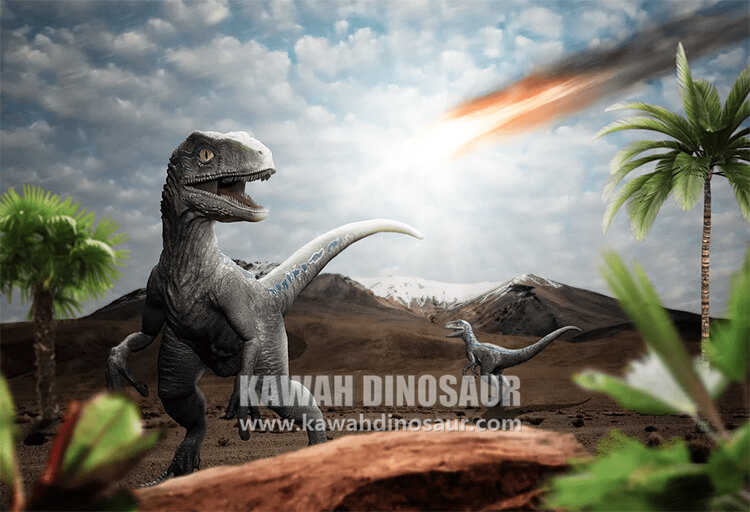 The reasons for the extinction of dinosaurs on the hypothesis that the above-mentioned far more than these. But these above-mentioned hypothesis in the scientific community has more supporters.Of course, each of the above, there is an imperfect place. For example, "climate change" does not clarify the causes of climate change. After inspection, some small dinosaurs in the Coelurosauria,with enough early against small mammals, so "species struggle to say" there are loopholes. In modern geology, the "continental drift theory" itself is still a hypothesis."Angiosperms poisoning" and "acid rain" the same lack of sufficient evidence. As a result, the real cause of the extinction of dinosaurs, have yet to explore it further.